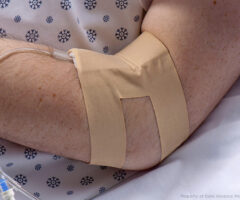 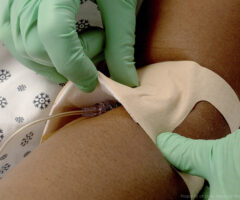 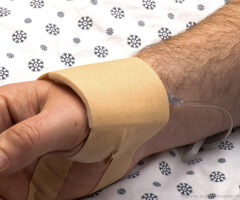 Dale’s IV-ARMOR® is the ideal way to maximize IV patency while protecting the site from patient tampering.

Katherine Major, RN, MS, discusses the risks associated with IV pump alarms and the role of securement of the IV lines in the reducing false alarms and IV restarts.

“I have come to the conclusion that the hospital and patient would benefit in having this device available for use. The cost associated with restarting an IV is much more than the cost of this product.” – Lisa, RN

“The biggest improvement we saw on the Progressive Care Unit was with the patient satisfaction and statements. We have mostly double rooms and the IV beeping is a big dissatisfier for patients and staff. We had quite a few patients who asked for it when they saw another patient with it or had used it within the last week or two when admitted. We also found out that the staff were changing out AC IVs as soon as the patient arrived from the ED to save the IV beeping. The practice changed when we got the IV-ARMOR and they were able to keep the IV in the AC a lot longer. As a Clinical Nurse Specialist I was very excited to hear the overall satisfaction with the patients and staff both. I can’t believe we didn’t have something like this sooner.” – Deanna J. RN, MSN

“Patient commented how great it was that the IV didn’t beep in the AC (frequent patient). While removing, he stated the adhesive didn’t hurt to come off.”” – Jeremy, MSN “Patient very happy. Went from alarm every 5-10 min to none. Harder to check on IV site, but worth it for the patient satisfaction.” – Susan, RN

“Once the IV-ARMOR was placed over the IV site, the patient was a lot less anxious as she felt the IV site was “out of sight, out of mind”. The use of IV-ARMOR was perfect for a phobic patient.” – Eugene, RN, BSN, CCRN, CPAN

Looking for a Sample Product?